We wanted to ensure that you are well informed of where we are and how we got here.

Our Purchase of Cedar Haven

As you know, Cedar Haven is a remarkable facility, with a history of zero deficiencies and a compassionate staff.  Because of these characteristics and many other reasons, we, along with others in the Skilled Nursing community, were interested in acquiring Cedar Haven from the County of Lebanon.

As you know, when the County owned Cedar Haven its financial performance was negative and the facility required the County of Lebanon to invest yearly in operating losses and capital projects.  This was unsustainable for the County and they reached a decision that they could no longer use tax proceeds to fund Cedar Haven’s losses.   This was the reason for the sale.

Since the change in ownership in late 2014, Cedar Haven has implemented a number of initiatives to improve the quality of care, to hire additional nursing staff, to increase and improve communications both internally and externally and to build census to a level closer to our licensed bed count.  Despite these efforts, the facility has continued to experience significant operating losses.

The Negotiation Process – May through September

In May 2016, Cedar Haven started negotiating with AFSCME for a collective bargaining agreement to take the place of the one that expired on September 30.  During the last four months, management met with Union representatives on 11 separate occasions to inform them of the reasons for requesting concessions, to ask for specific feedback from the Union and to negotiate the best possible outcome for the facility and the employees. Since Cedar Haven is no longer subsidized by Lebanon County, it has to be able to support itself on its own revenue and ability to control costs.

Cedar Haven ensured that the Union was fully informed of the challenges facing it, including:

We do very much care about the residents, their families and the dedicated employees who work at Cedar Haven.  Rather than cut staff and wages as was feared by some, we have attempted to increase staff.  In June, during these negotiations and with the consent of the Union, we substantially increased the starting wage rate for LPNs and CNAs, and raised the wage rate of existing LPNs and CNAs who were below that rate.  We were agreeable to doing this, rather than holding it back and trying to use it as a bargaining chip, to be able to compete with other facilities to hire and retain qualified staff and to ensure that we could continue to provide excellent care for our residents.  This resulted in $1,000,000 in increased payroll expenses annually and represented an average wage increase of 11% for 85% of LPNs and CNAs (65% of all bargaining unit employees).

In an effort to achieve self-sufficiency, Cedar Haven sought changes from the Union. Changes are never desirable – no one wants less. To assure employees that they would share in any profits resulting from our cost-cutting measures, we proposed a profit-sharing plan. Any profits would have been shared among facility improvements, employees and investors.  When the Union informed us that employees were not interested in receiving a share of the profits and that our proposal to put all paid time off in one bank of time was confusing to employees, we revised our proposals to have the collective bargaining agreement structured in a more familiar way.

On September 20, Cedar Haven and AFSCME entered into a Memorandum of Agreement (MOA) that included, among other items, a proposed $0.25 per hour wage increase for certain employees who did not receive a raise increase in June (discussed above).  Cedar Haven was willing to pay that to have an agreement ratified by September 23 to enable Cedar Haven to have a smooth transition upon the expiration of the prior agreement.  Unfortunately, that agreement was not ratified. Cedar Haven then extended the offer to September 26, hoping that the September 23 healthcare meetings would help employees understand the benefits of the proposed new healthcare plans, but no additional vote was taken.  We informed the Union that if the MOA was not ratified, it would be off the table and that our Last, Best and Final offer dated September 13 was what Cedar Haven was willing to give.  The Union then proposed over $1.4 million in additional costs – above what it had agreed to in the MOA. Because further negotiations would be futile, the parties were at impasse and Cedar Haven implemented its Last, Best and Final offer on October 1.

Rising healthcare cost is a challenge for everyone in the country today.  To minimize the impact of increased health care costs, we implemented the wage increase in June, described above, and aggressively pressed our benefits consultants and carriers for the best options for our employees – plans that would meet their needs while resulting in cost savings for Cedar Haven.  When the Union communicated that Cedar Haven’s healthcare proposal was too expensive for employees, we proposed cost reductions elsewhere in the agreement to provide for a Health Reimbursement Account (“HRA”).  The terms of our proposal included:

In addition, we agreed to increase our required amount of life insurance under the agreement from $3,500 to $10,000.

Paid time off is important.  Hardworking employees deserve time off to rest and enjoy time with their friends and family.  Despite reductions, the following amount of paid time off was offered.

We approached this process with the objective to find an outcome that was most favorable for everyone while supporting the economic realities, as well as the operational goal to improve the clinical care for our residents in the most efficient and effective manner possible.

We believe that if you had been a participant in our process, you would know that we were professional, creative, committed and made every effort to negotiate with the Union in a fair and balanced manner given the circumstances of Cedar Haven.

Thank you for taking time to read this summary of the events which occurred since May in an effort to find a mutually acceptable agreement. 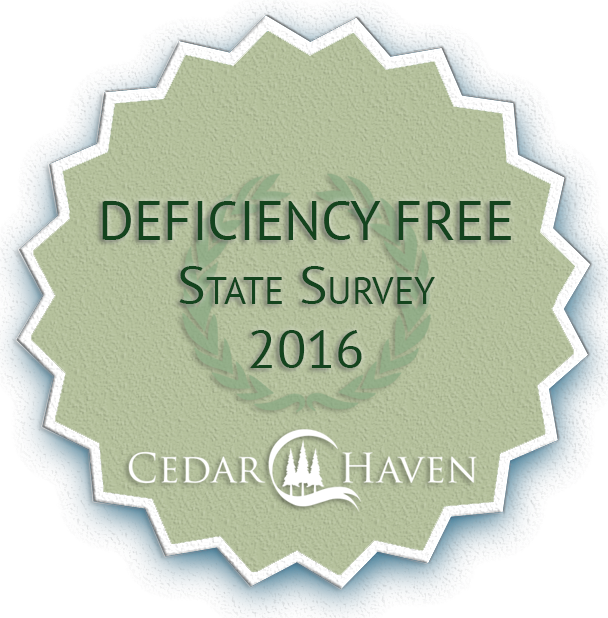